This road was the picture which appeared on my first post: 'To boldy go'.

I didn't know then if it would be the last.

A few years on now, the road keeps rolling.

The destination is no clearer but rather than bemourn uncertain outcomes, I am reveling in the adventure.

This is how I view learning, teaching, living.

I am reveling in the adventure.

When times are hard, I think of all the people that I have met who have shared a smile, a beer, a laugh, a story, a song and they are the ones that keep me going...

Every day, I drive the same route, in the same car, struggle to find a parking space, and think to myself: "I wonder what's going to happen next."

In the classroom yesterday, there were a number of students who were sharing what they had learnt, or at least stuff which appealed to them:  sailing, rugby refereeing, mental preparation, Ellen de Generes, the Walking Dead, a football match, others were actually (to my astonishment) choosing to in speak English to each other.

Others were busy preparing their work on a gap year project which was due for the following week.

In the background there was a group of students gathered around a guitar who were singing covers of Daft Punk, perhaps John Lennon...I don't remember.

There was also an ex-student, Julien Diot, who had studied with me 6 years before- who was taking a break from his globe-trotting, before going off to Costa Rica, to help the other students with their gap year projects.

There are so may stories...

There is one photo of his which resonates with me, it is a collage of photos of people who gave him a place to stay in New Zealand.

It is a testimony to the generosity of people. 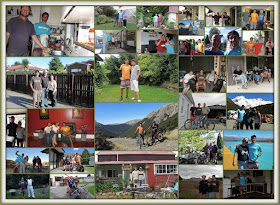 At about 11:30, I wandered over to listen to what the students, Etienne with a guitar and Loic had prepared for their 'learn and share' session, I was expecting another cover version of a song.

Nope...they had actually written a song in English - entitled...Road Trip.

I took a photo of their manuscipt:

They then did an encore of Get Lucky - captured by another student on another phone.

At 12:00 I tweeted the following message:

@cogdog @dogtrax et al Some students wrote this song can we get u to sing it too? https://t.co/h3YifazeLF #digiwrimo pic.twitter.com/2nzILeUoKS
— Simon Ensor (@sensor63) November 4, 2015


A tweet in appreciation of Maha's singing and Etienne and Loic's lyrics arrived from Maha (another one) in Egypt:


Three hours and forty five minutes later, a tweet arrived from the USA:


@sensor63 @NomadWarMachine @dogtrax that kid can play! You want an original version with words or layer on their recording?
— Alan Levine (@cogdog) November 4, 2015

There were a number of conversations going on about the song between people in at least three continents.

One problem of the original tweet was the manuscipt. It wasn't adapted to all the people who might want to contribute but were prevented from doing so by problems of legibility.

Not everybody wanted to sing or play guitar, Ronald transformed the song into a poem:

In Australia, Wendy Taleo wrote a poem inspired by the theme of the song:


In the middle of the night, the afternoon, the morning, Alan Levine, perhaps in Arizona shared a new version of Road trip:


The following day, a new grunge version arrived from Bryan Murley over in Illinois.

After a bit of faffing around I worked out how to embed it from Google Drive here:

(I recommend turning up the volume to fully appreciate the effect Bryan :-)

And then a few hours later...Kevin in Massachusetts posted a completely different version with totally remixed music.


Then Bryan came back and shared his grunge on Souncloud, Thanks to you Bryan I have learnt how to embed audio from Google drive :-)

And then Sarah up in Scotland kilted the song out completely differently....


Then a bit later on she blogged about her remix here:

I have really no idea where all of this is going.

There is some talk of a country version,

This song is going to hit a lot of diff. styles, I think. I had a country version ready, haven't recorded yet. :) https://t.co/aA9dmsbAfF
— Bryan Murley (@bmurley) November 6, 2015


Maha is talking about a lyric hack:

This Road Trip is really becoming illustrative of the complexity of Road Trips.

Travellers come together, spend time in conversation, tell stories, sing a few verses, and part going off on different routes, where they will take parts of their learnt songs and stories to new conversations in new places with new people.

I am becoming unable to follow their traces. I am now reliant on others who will be able to tell their part of the story, a part in which I am now absent. I am becoming to think that this will be a fascinating collaborative research project into creative emergence.

I finally get round to reading Bruno's Road Trip Story here in his blog where he has embedded the image of Etienne and Loic's manuscript,... I in turn am beginning to be inspired by this story of a Road Trip song to write...

@EtienneNassi makes me think that I need to write about travel as well. Sent @dogtrax a poem I wrote in 1984 from Florence. #digiwrimo
— Simon Ensor (@sensor63) November 8, 2015

I shall look forward to listening to how the other branches of the story mutate.
There are too many branches for me to collect here.

I decide to attempt to follow the different routes that this Road Trip is taking.

Bryan comes up with not one but two country versions:

And then for good measure uploads them to Soundtrap to enable people to record tracks to accompany him. 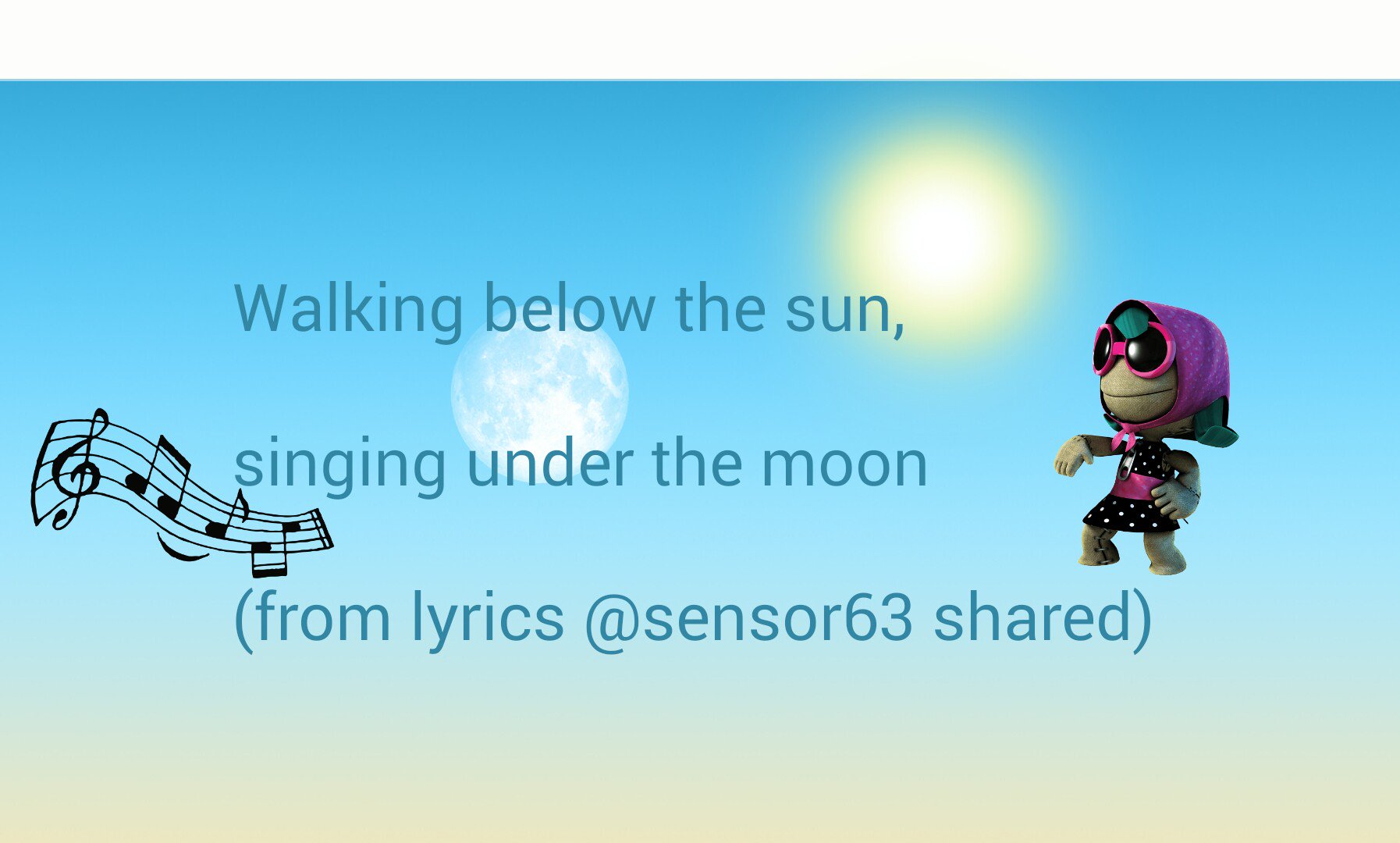 A series of six word stories inspired by two lines of Etienne and Loic's song, written by Wendy, Ronald, Maha, and others have been assembled and are going to be put to music by Laura's music students over in the UK.

Meanwhile, over in Canada, Maureen is contributing to a collaborative story with #digiwrimo and hears Kevin's aforementioned version of Etienne and Loic's song.

She includes the song in part 13 of the story quite unaware of the origin of Kevin's rendition of Road Trip.


I love the writing in the Quill & Ink! #DigiWriMo this story is compelling check out lucky part 13 https://t.co/0QLtpgtvn3 @rljessen
— Maureen Crawford (@jmc3ualberta) 8 Novembre 2015

Meanwhile, somewhere upstairs in a house in Glasgow Scotland, someone is doing a Road Trip song:

@sensor63 @niall_barr I can hear somebody upstaris singing about a roadtrip now ...
— Sarah Honeychurch (@NomadWarMachine) 8 Novembre 2015

The person in question, Niall is the aforementioned Sarah's husband, he comes downstairs:

@sensor63 @niall_barr never! He's just come down and given me Band in a Box so I can make more noise to torment you all :)
— Sarah Honeychurch (@NomadWarMachine) 8 Novembre 2015

He goes upstairs, a tragic crime is committed:

@NomadWarMachine @sensor63 I listened to the recording, realised the people who run when they see me near a karaoke are right, and deleted.
— Niall Barr (@niall_barr) 8 Novembre 2015

Will we ever get to hear the lost Scottish version of Road Trip?

Meanwhile, I am waiting with impatience to hear what Laura's music students will compose, I am waiting to hear if Maha's guitar-playing friend will be heard playing with Bryan in Illinois.

@Bali_Maha @NomadWarMachine @sensor63 @bmurley @EtienneNassiet any excuse to play guitar as always! Not sure what I want me to play though.
— Sherif Osman (@the_sosman) 7 Novembre 2015

This morning I decided to mess around with WeVideo a Google Drive App and see what I could do with Road Trip. I used Kevin's Remix and came up with this


I don't how Etienne and Loic will respond to the Road Trip that their song has been taking.

I know that Etienne tweeted this reaction to Maha's interpretation:


This is perhaps the most important lesson I have learnt: we don't need to leave the walls of a class room to appreciate the diversity, the creativity, and the generosity of the people around us...around the world.

We don't have to travel to have a Road Trip, to have an adventure.

We do need faith.

To write is to throw yourself into an abyss while telling yourself: I'll be caught no doubt...by meaning #digiwrimo pic.twitter.com/JRlqoGnk2h
— Simon Ensor (@sensor63) November 4, 2015


I think that I would like to remix that quotation:

To write is to throw yourself into an abyss while telling yourself: I'll be caught no doubt...by people who find meaning in this.

There are days when we get lucky...

Thank you Etienne and Loic, Maha, Ronald, Wendy, Alan, Bryan, Kevin, Julien and you all for sharing with us.

It means a lot.